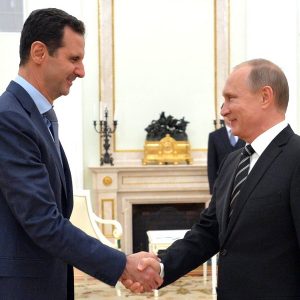 Turkey’s invasion of northeastern Syria occurred at a time when Israel’s defense establishment is dealing with increased concerns over Iranian attack plots. Recent Iranian activities have presented urgent, clear, and present dangers. They include, for example, an Iranian attack cell that was in the final stages of preparing an explosive drone attack in August when it was struck by the Israeli Air Force. From Israel’s perspective, developments in Syria represent an unmistakable deterioration in the security situation due to an increase in both quality and quantity of Iranian offensive activities.

As the Assad regime, backed by Moscow and Tehran, wraps up the civil war and takes back more and more territory from what remains of rebel forces, Iran is exploiting the situation to try to set up bases for the building and firing of missiles and drones at Israel.

Tehran has pursued these efforts for more than two years, but has been effectively checked by Israeli preventative action. It is now threatening to respond to future Israeli strikes, raising tensions considerably. It is also trying to help Hezbollah build precision missiles, which would allow it to accurately target strategic Israeli sites — a capability Israel has marked as a clear red line.

Israel is on high alert across its northern front as it monitors and works to block the increased activities of the Iranian Quds Force, the shadowy overseas operations unit under the command of Iranian Gen. Qassem Soleimani. The general answers directly to Iran’s Supreme Leader Ayatollah Khamenei.

That tension became even more pronounced on Monday, October 28, when, according to Israel’s Kan news program, a number of Israeli embassies went on high alert due to concerns about Iranian terror attacks.

One of Soleimani’s efforts over the past few years has involved ongoing attempts to build a land corridor linking Iran to Syria. If the Iranians succeed in controlling border crossings, they will be able to send ground convoys of weapons, militia members, and equipment to Syria and Lebanon from Iran via Iraq.

While Tehran is unhappy about the invasion of Syria by its regional rival, Turkey, it will undoubtedly recognize new opportunities in the exit of US special forces from northeastern Syria, which borders Iraq. This area could become part of the Iranian axis’s new land corridor. The collapse of the moderate US-backed Kurdish autonomous zone in the area means the Iranians can move in and establish a new presence.

In a recent article, Doron Itzchakov, an Iran specialist at the Begin-Sadat Center for Strategic Studies, notes that the Turkish invasion of Syria harms the Assad regime’s sovereignty, thereby harming Iranian interests. Itzchakov also notes that a plethora of Sunni Salafi-jihadist groups, such as Jaish al-Islam, Ahrar al-Shab, and others, are taking an active role in the Turkish maneuver. These jihadist militias, some linked to al-Qaeda, are hostile to Shiite interests. … [To read the full article, click the following LINK – Ed.]

By ordering U.S. troops to finally leave Syria, President Donald Trump has brought down a whole pile of bricks onto his own head—including many pitched from stalwart supporters in his own party. The Washington foreign-party establishment is in a complete tizzy. The withdrawal is said to constitute simultaneously a grand moral failure on par with the Munich Agreement. It is also a geopolitical catastrophe that will benefit practically all of America’s “adversaries,” especially the wily and apparently devious Kremlin, which the New York Times declares “is savoring a fresh chance to build its status as a resurgent world power.”

Are Russians, in fact, doing a “victory dance” and laughing at the capricious Americans? Not quite. In fact, a column by Vladimir Muchin in the Russian newspaper Nezavisimaya Gazeta says nearly the opposite. The column implies that the room for debate on sensitive issues in the Moscow press is significantly larger than most Western accounts ordinarily allow, but it also suggests that the zero-sum framework for analyzing foreign-policy issues currently in vogue among leading Western journalists is deeply flawed.

Muchin starts by summarizing Trump’s provocative comments on Syria for Russian readers. He explains that Trump has actually wished Moscow “luck [удачи]” with its endeavor to help Damascus. However, the Russian columnist immediately points out that President Donald Trump also raised the historical analogy of Soviet involvement in Afghanistan to point out the perils for great powers of frittering away resources in complex regional contingencies. Predictably, this point resonates in some rather deep and powerful ways in the Russian mind. Muchin explains that Trump then twisted the rhetorical knife, asserting “if Russia wants to be involved in Syria, that’s their affair [если Россия хочет быть вовлечена в Сирию, это их дело].”

The Russian author finds it “interesting” that Trump claimed that U.S. soldiers needed to be brought back from Syria since they are needed on the border with Mexico. Predictably, he contends that Trump is correct to have removed U.S. troops in that they are there “illegally [незаконно].” Yet, the Afghanistan analogy does not necessarily sit well with Russian readers. After all, during the 1980s the USSR had far more soldiers in countries other than Afghanistan, for example in Eastern Europe or even Mongolia, Muchin explains. Today, he continues, Russia has far fewer soldiers abroad and, moreover, the contingent in Syria is not especially large. Nevertheless, Muchin seems to sympathize with Trump and says that the costs to Russia for the ongoing Syrian intervention are actually not small. … [To read the full article, click the following LINK – Ed.]
______________________________________________________

Regarding ISIS, the obvious lesson of the al-Baghdadi raid is that Trump’s critics’ claim that his withdrawal of US forces from Syria’s border with Turkey meant that he was going to allow ISIS to regenerate was utterly baseless.
The raid did more than that. Al-Baghdadi’s assassination, and Trump’s discussion of the mass murderer’s death, showed that Trump has not merely maintained faith with the fight against ISIS and its allied jihadist groups. He has fundamentally changed the US’s counterterror fighting doctrine, particularly as it relates to psychological warfare against jihadists.

Following the September 11 attacks, the Bush administration initiated a public diplomacy campaign in the Arab-Islamic world. Rather than attack and undermine the jihadist doctrine that insists that it is the religious duty of Muslims to fight with the aim of conquering the non-Muslim world and to establish a global Islamic empire or caliphate, the Bush strategy was to ignore the jihad in the hopes of appeasing its adherents. The basic line of the Bush administration’s public diplomacy campaign was to embrace the mantra that Islam is peace, and assert that the US loves Islam because the US seeks peace.
Along these lines, in 2005, then secretary of state Condoleezza Rice prohibited the State Department, FBI and US intelligence agencies from using “controversial” terms like “radical Islam,” and “jihad” in official documents.
The Obama administration took the Bush administration’s obsequious approach to strategic communications several steps further. President Barack Obama and his advisers went out of their way to express sympathy for the “Islamic world.”

The Obama administration supported the jihadist Muslim Brotherhood against Egypt’s long-serving president and US ally Hosni Mubarak and backed Mubarak’s overthrow with the full knowledge that the only force powerful enough to replace him was the Muslim Brotherhood.

On Wednesday, Russian President Vladimir Putin parted with an important secret. At a press conference with his Hungarian counterpart Viktor Orban in Budapest, he said that Russia maintains a close relationship with Syria’s Jewish community, and is even helping to restore its synagogues.

Putin did not go into detail regarding the identity of the community members receiving assistance, how much money the Russian government is contributing, or what synagogues they are actually restoring. He also did not mention whether the Israeli government is involved.

But if Russia is indeed offering assistance, it is probably doing so in coordination with its close Syrian government ally. And it would not be the first time Russia has facilitated some kind of cooperation between the Syrian government and Israel in the last few years. In April 2019, it returned the remains of Israeli soldier Zachary Baumel, who had been declared missing after the battle of Sultan Yacoub in Syria in 1982. In 2016, Russia also returned a tank that took part in that battle and had been seized by Syrian forces.

The number of Jews remaining in Syria is unknown since the last wave of emigration in 1994, launched after Syrian President Hafez Assad’s decision to allow Jews to leave his country following the Madrid peace conference. According to Syrian law, population censuses do not report on ethnic segmentation, and it is not permitted to report on the condition of various ethnic groups, in an attempt to prevent civil tensions.

Some of the Jews of Damascus, that numbered around 1,200 in 2013, moved to the city of Baniyas in the Tartous district after the Great Synagogue in the Jobar quarter was destroyed that year, apparently by the Free Syrian Army. Some also moved to the city of Qamishli in northern Syria, where a market established by the Ezra and Nahum families in the 1920s still exists – although most its stalls were sold to Kurds after Jews emigrated.

Samuel Zion, who manages the Facebook page of the Jews of Syria, told the website Al-Mudun in June 2014 that official Israeli representatives have been in contact with the Jewish community in Syria. They reportedly tried to obtain ancient Torah scrolls, but community leaders had rejected the overtures. According to Zion, the community supports President Bashar al-Assad and opposes Israel’s policies.

Making sure the U.S. stays home

Putin’s open support for Syrian synagogues is inseparable from the religious patronage Russia extends to non-Muslim communities in the region. “The situation of the Christians in the Middle East is tragic. They suffer from oppression, rape and plunder,” Putin said at the Budapest press conference, adding that Russia was seeking ways to protect Christians from harassment and to that end it had invited the heads of Christian communities to a meeting with him on the sidelines of the state visit.

This is not pure altruism on the part of the Russian leader, who, throughout the years of Russia’s military involvement in Syria, had not been especially moved by the killings of civilians of any religions. But the protection of Christian civilians, who constitute some 16 percent of the population, is important political leverage that could be instrumental as parties negotiate a diplomatic solution to the end of the war. Christians are generally considered favorable to the regime, and most of them did not enlist in rebel militias. According to a draft of the constitution, they are expected to be given suitable political representation when the new regime is established. … [To read the full article, click the following LINK – Ed.]
______________________________________________________

Russia Reportedly in Possession of Advanced Israeli Interceptor Missile:  Times of Israel, Nov. 6, 2019 –– Russia is in possession of an advanced Israeli interceptor missile that was launched last year in response to Syrian rocket fire, according to a Chinese news site.

Team to Report on Perpetrators of Syrian Chemical Attacks:  NYT, Nov. 5, 2019 — The investigation team in charge of identifying perpetrators of chemical weapons attacks in Syria will produce its first report “in the next few months,” the head of the Organization for the Prohibition of Chemical Weapons said Tuesday.