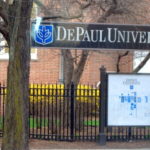 Last month, the Garrett-Evangelical Theological Seminary (G-ETS) appointed Taurean J. Webb as its Director of the Center for the Church and the Black Experience. The prominent Methodist seminary also announced that Webb would be joining its faculty as an assistant professor of religion and race upon completion of his dissertation.

“We are delighted that Mr. Webb has accepted our invitation to join the Garrett-Evangelical faculty,” said G-ETS President Lallene J. Rector. “His work in black theology, commitment to interfaith dialogue and activism, and expertise in critical race theory are gifts that will enhance and strengthen the seminary’s commitment to preparing spiritual leaders for today’s church and world.”

If G-ETS considers what Webb has to offer as “gifts,” then hopefully they kept the receipts. Using his position as Adjunct Professor of Black History at DePaul University, Webb was a featured speaker at the 2018 convention of American Muslims for Palestine (AMP).

While AMP claims to stand “against all forms of bigotry and racism,” the annual event boasted a star-studded cast of anti-Jewish bigots and terrorist sympathizers. Sharing the platform with Webb were Imam Omar Suleiman, who has called homosexuality a “repugnant shameless sin” and justified sex slavery, and Nihad Awad, Executive Director of the Council on American-Islamic Relations (CAIR), who is on record as lending support to genocidal terrorist groups such as Hamas and Hezbollah.

Continue on The Daily Wire