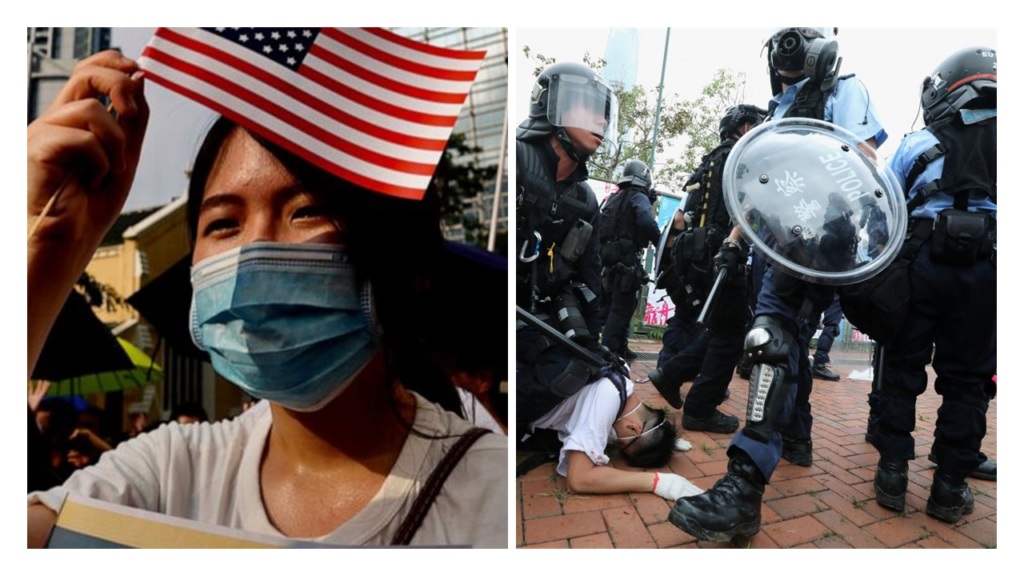 One of the most enduring modern images summing up mankind’s indomitable drive for freedom was the deeply moving image of a single unarmed man in a white shirt courageously bringing a massive, hulking Red Army tank column to a halt, during the ultimately crushed June 1989 Tienanmen Square student demonstrations.

Today, it behooves all people of goodwill, committed to liberty and freedom, and particularly Jews and the democratic Jewish state of Israel, to support the Hong Kong freedom movement. The long Jewish experience of resisting oppression, anti-Semitism, pogroms, Holocaust and anti-Israel terrorism, should predispose us to recognize and support the Hong Kongers’ legitimate struggle for human rights and freedom.

We are witnessing today In Hong Kong a replay of that 1989 drama, the resolution of which may well—without international political and moral solidarity–tragically repeat China’s bloody earlier 1989 suppression. The massive demonstrations today, also student-led, replicate the crowds back then, which some observers estimated at over a million, with the Peoples’ Republic Army repression probably resulting (figures are hard to come by, as Peking suppressed all information) in thousands of deaths and casualties.

Then, demonstrators expressed their hope by building a papier-maché Statue of Liberty in the Square; today, they carry U.S. and Union Jack flags, and sing the State-Spangled Banner in front of the U.S. Consulate.

These courageous young people must not again be abandoned by the source of their democratic ideals, the Western democracies. And here, again, Jews, who know only too well the consequences of such abandonment, have an important part to play.

Hong Kong, historically part of pre-modern China, became a British colony in the nineteenth century (ceded in 1842 by the Qing dynasty), and was occupied by Japan from 1941-1945. Chinese people had no knowledge or history of antisemitism, and China long boasted small but vibrant Jewish communities (Kaifeng; Harbin [Manchuria]; Shanghai), reinforced just before and during World War II by a steady stream of Jewish refugees, who sought and found succor largely in Shanghai.

(China—largely under the Nationalist government of Chiang Kai-shek, rather than the emerging Communist movement under Mao Tse-tung–resisted the Japanese invasion of 1937. China played a key role in aiding the success of America’s Pacific campaign by tying down over a million Japanese troops, thousands of aircraft, and other war materiel and resources. And it is now estimated that up to thirty million Chinese lost their lives during WWII, fighting and suffering exploitation by Tokyo’s occupation forces.)

The Jewish and Chinese peoples, the world’s two oldest, enduring civilizations, share many characteristics: an emphasis on family, community and tradition, and a deep respect for learning. Indeed, modern Israel and China today enjoy increasingly close and mutually-beneficial economic, technological and military relations.

And Israel and Hong Kong, too, have excellent relations. Israel has an Honorary Consul in the city, and they have signed trade, technology, and educational-cultural agreements. In 2013 Hong Kong billionaire Le Ka-shing donated $130 million to the Technion, Speaker of the Israeli Knesset, Yuli Edestein, visited officially in 2016, and Israel is the city’s biggest source of visitors in the Middle East (with over 64,000 Israelis visiting annually since 2016).

Communist Party rule in China, nonetheless, remains monopolistic and authoritarian, and obviously views the Hong Kong demonstrations, however relatively peaceful to this point, as threatening. Conversely, the great majority of Hong Kong’s 7½ million citizens, directly or indirectly, support the demonstrations against Communist China’s abrogation of its 1984 Sino-British Joint Declaration, and the related 1990 Basic Law which led to the handover of Britain’s former colony to China in 1997.

The Basic Law, Hong Kong’s “mini-constitution”, guaranteed a large degree of internal autonomy for fifty years, through the “One Country, Two Systems” principle, including juridical and press freedom and universal suffrage (Article 45, unimplemented).

Feared suppression of guaranteed basic freedoms by the Peoples’ Republic of China led to popular rioting and demonstrations in 2014 and 2017 (“the “Umbrella Revolution”), just as a recent move to abrogate procedural guarantees by imposing extradition to Chinese jurisdiction for criminal (including “political”) offenses sparked the current crisis.

Hong Kong chief executive Carrie Lam recently, and belatedly, bowed to the demand formally to rescind the extradition threat, but that initial focus has now expanded to include four other demands—that Lam resign, that an inquiry into police brutality be established, that those arrested to this point be released, and that, generally, full democracy and police accountability be assured.

Whether there is enough give in the PRC’s Communist Party-dominated regime to make sufficient concessions to stabilize the current crisis, is moot.

As the People’s Republic anticipates celebrating its 70th anniversary on October 1, President Xi Jinping, who has increasingly gathered all power into his own hands, is facing a series of interrelated problems.

These include the lengthening tariff trade war with the US, contraction of the Chinese economy, slowing momentum of his multi-billion dollar, international-development “Belt and Road” initiative, continuing tensions with independent, democratic Taiwan, US-led regional opposition to China’s military build-up and expansion in the South China Sea, mounting international criticism of suppression of the Muslim Uighur minority, stubborn resistance of Tibet to imposed Chinese Han dominance, diplomatic problems with Japan (and with China’s erratic North Korean client), and so on.

Hence Xi must move carefully on Hong Kong. Unlike the relatively isolated, inland student protesters of 1989, Hong Kong is a key international financial, aviation, and media hub, with hundreds of thousands of Western citizen-residents (300,000 Canadians alone), and an international Hong Kong Diaspora living in the UK, US, Canada, Australia, etc.  And the ubiquity of social media, unknown in 1989, has brought coverage of Hong Kong immediately into public view (even in tightly-controlled mainland China itself).

Hence, with the global media now focused on the city, any bloody Tienanmen-style repression would give Xi’s leadership a not-easily-undone black eye. Indeed, U.S. President Trump and British, Commonwealth and European leaders have warned against any precipitate repression. And in the US Congressional calls for a bipartisan “Hong Kong Human Rights and Democracy Act”, which would require an annual review of special agreements, replete with sanctions for Chinese non-compliance, are picking up steam.

As a result, China has so far proceeded with relative caution in Hong Kong, as Carrie Lam’s formal withdrawal of the extradition law sparking the protests indicates. Nevertheless, this should not be taken to mean that any further giving-in to the “Five Demands” will soon follow, or that a sudden Tienanmen Square-style armed suppression is out of the question.

Indeed, the Tienanmen precedent reflects the long history of Communist regimes intervening in crises to suppress threatening internal democratic-reform movements, from Soviet intervention in Hungary and Czechoslovakia to China’s own intervention in Tibet (and, currently, in Xinjiang Province with the Uighurs).  As well, there is a parallel record of Western failure, despite often falsely-encouraging rhetoric, effectively to support such movements.

In the absence of clearly-stated U.S., British and Western support for the maintenance of Hong Kong’s autonomy, Peking will no doubt intervene should the Hong Kong protests evolve into what it considers a major challenge to its continuing hegemony,

All the more reason, now, to voice in all appropriate public ways support for the Hong Kong protesters’ courageous affirmation of their human and democratic rights.  Neither we, nor the Hong Kongers, nor the people of China need another 1989-style tragedy. It is incumbent that Jews generally, and the democratic State of Israel, specifically—which can not only maintain but use, its correct international relations with the Peoples’ Republic–be at the forefront of support for this freedom movement.

(Prof. Frederick Krantz is Director of the Canadian