Upcoming Event: The Rock and the Star (Apr 22) 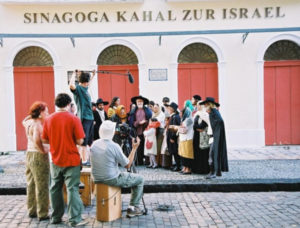 This is the story of the first Jewish colony in the Americas at the time of and after the Inquisition.
Throughout the 16th century and especially during the Dutch colonial presence in Brazil, Recife was the most important city of the New World, due to its safe and welcoming harbor, and its proximity to Europe.

For a long time it was the only place that offered religious freedom for Jews fleeing the Inquisition. There, in Recife, they founded the first synagogue in the Americas.
Part of this film traces the history of the Jews from Recife to the Port of New Amsterdam, where 23 of them arrived in 1654 to establish the first Jewish community in North America.

Katia Mesel’s film career spans 50-year. She is a pioneer of the cinema in the state of Pernambuco, and has created more than 300 audiovisual works. Katia researched and filmed in Brazil, USA, Holland, France, Spain, Portugal and Curaçao . The film includes more than 30 interviews, 20 historical reconstructions, 1000+ still photos and drawings.

Organized by Kulanu Canada and the Canadian Institute for Jewish Research