For a PDF of Israfax 297 click the following link 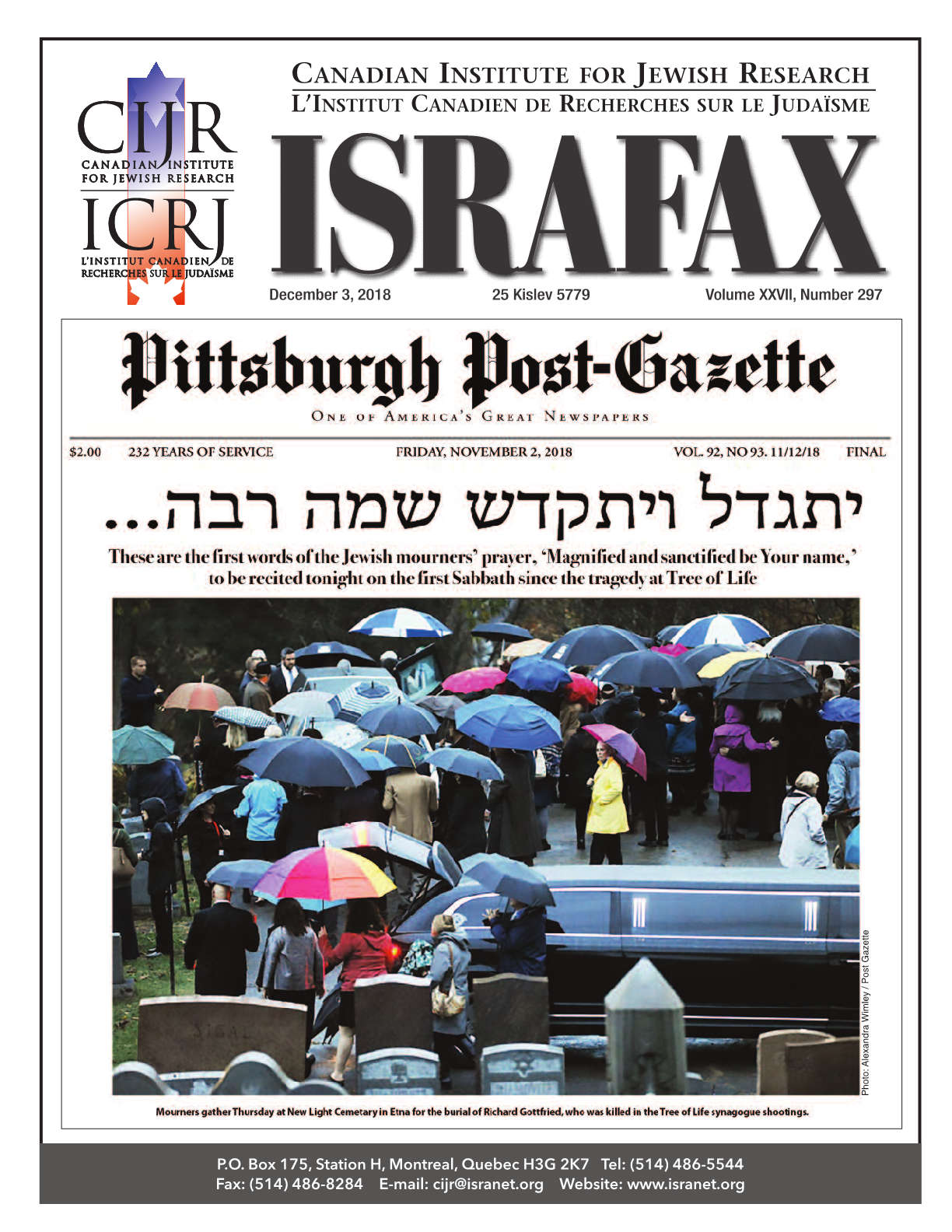 EDITORIAL: FIDDLING ON THE ROOF:

COPING WITH THE OLD, AND THE NEW, ANTISEMITISM

On Wednesday, 14 November, the New York Times recounts, at the end of the first act of Fiddler on the Roof at the Hippodrome Theater in Baltimore, Md., after Russian antisemites stage a pogrom against residents of a Jewish shtetl celebrating a wedding, a man jumped up in the balcony, repeatedly yelling “Heil Hitler! Heil Trump!”.

Several theater-goers feared a mass shooting—the Pittsburgh synagogue murders, after all, occurred only a short time before. One man, “frightened and disturbed”, shrank in his seat, fearing that “this guy [may have] a gun”.  Another, noting that several audience members ran for the exits, said “I was waiting to hear a gunshot, frankly”.

Baltimore police arrested the alleged screamer, one Anthony M. Derlunis II, 58, whom they said had been drinking heavily, and who told them that he had yelled out because the scene in the play reminded him of his hatred of President Trump, a reaction borne out, he claimed, by the evidently high number of “Trump supporters” (i.e., Jews) reacting negatively to his outburst.

The frightening scene lasted about five minutes, and Mr. Derlunis was not charged by the Baltimore authorities—because, as they rather disingenuously put it, “As reprehensible as the man’s words were, they are considered protected free speech because nobody was directly threatened”. Yet the NYT’s account does note that he has now been banned from entering the theater.

Of course, in the current antisemitic climate (the rate of incidents in both the U.S. and Canada, like the rate of gun possession, has been steadily increasing in recent years), the Baltimore shouter, like the Pittsburgh shooter, might well have had a gun, and used it.  These incidents involve both the extreme right and extreme left, and while traditional antisemitic motifs are present–religious bigotry against Jews as such, resentment of “Jewish money” and political “influence”, etc.—themes clearly associated with what is termed “the new antisemitism” are also at work.

Here, not so much “the Jew” as political hatred of the Jewish State, Israel, is the focus of vitriol and resentment.  Arguing that Israel is a kind of Nazi oppressor of innocent Palestinians, this “new” antisemitism can—as in “anti-Zionist” “BDS” campaigns on campuses, where Islamist and leftist elements combine–masquerade as highly “moral” and “even-handed”.

Indeed, the “new” antisemites can even claim to be highly offended when accused of being antisemites–we are “human rights activists”, they [including, sadly, some “progressive” Jewish allies] say, cleverly claiming to be not anti-Jewish but “only” anti-Israel. As if their drive to delegitimate and, hence, to finish Hitler’s work by destroying the world’s only Jewish democratic state, is not the very essence of modern genocidal antisemitism!

That Fiddler on the Roof (an oddly American phenomenon, a musical about a pogrom) could provoke a Trump-hating and potentially dangerous meshugah to shout “Heil Hitler!” in a crowded theater, is a not-so-paradoxical commentary on our current, conflicted political moment.

While we are far from facing an imminent, State-supported Kristallnacht, it is deeply concerning that, in a U.S. only two years away from the next Presidential election, the left-“progressive” and Marxisand wing of the Democratic Party cultivates some members’ no-so-genteel anti-Israelism, while in Britain an outright antisemite, Jeremy Corbyn, heads a British Labour Party which might, on the heels of a Brexit-induced election, actually come to power.

We must be alert to an increasing degree of turmoil and uncertainty: the “longest hatred”, antisemitism, ever-protean in its ability to change forms, is alive and well.  The price of Jewish freedom is eternal vigilance, the ensuring of Jewish continuity, defense of basic democratic rights and traditions, and unified support for the well-being of the state of Israel, vital center of the Jewish people.

(Prof. Frederick Krantz is Director of the Canadian Institute for Jewish Research,

and editor of its ISRAFAX journal)