For a PDF of Israfax 295 click the following link 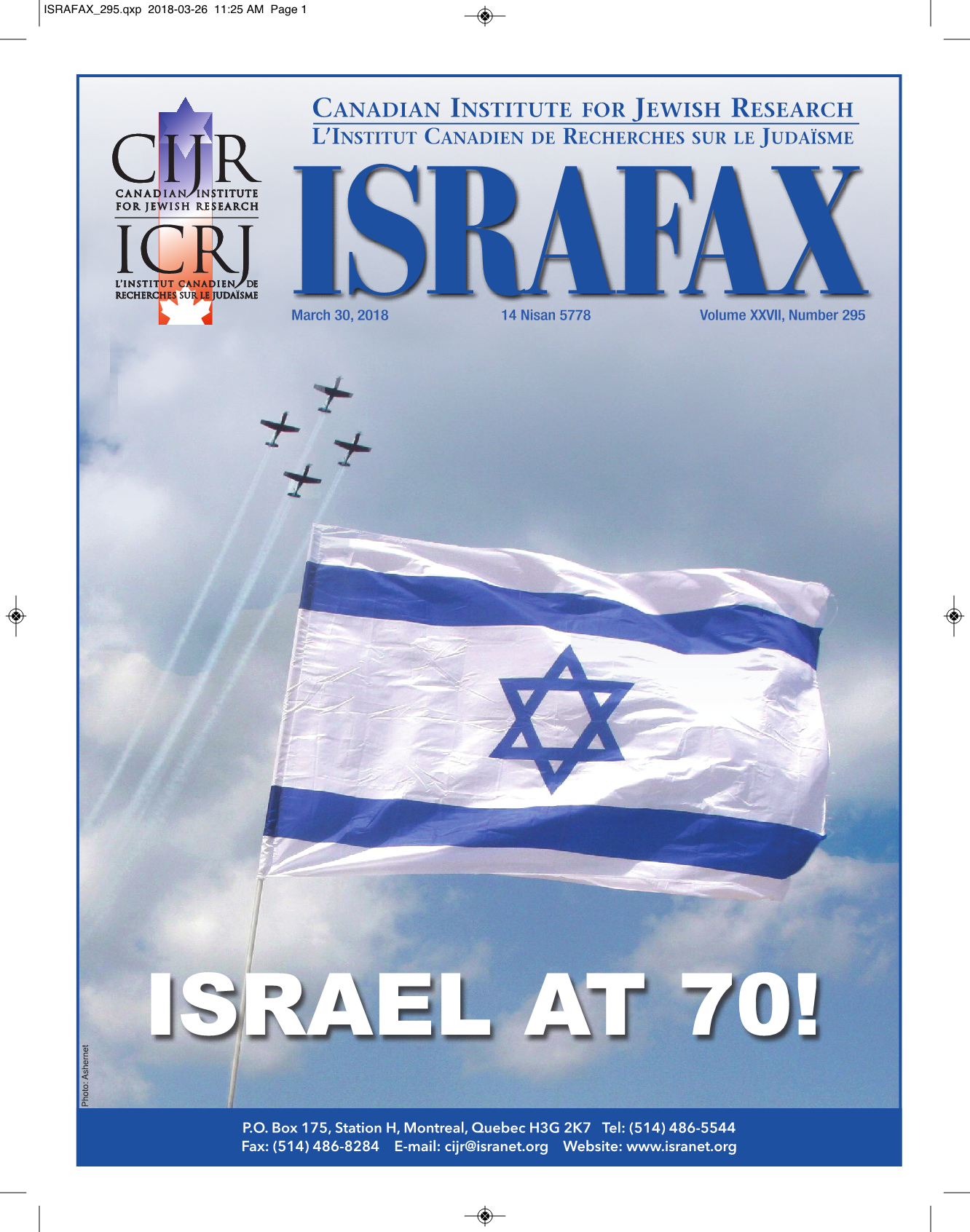 As the democratic Jewish state of Israel turns seventy, what is the historical-societal balance sheet? What is the meaning of modern Israel—which only three generations ago had to fight for its very existence against five invading Arab armies—both for the Jewish people and the world?

First, modern Israel is today one of the world’s most successful societies. Its standard of living ranks with the West European countries; a nuclear power, its IDF is considered among the top armies in the world. Its dynamic yet stable economy is outstanding, and technologically (including a remarkable space/satellite program) Israel outranks every major country save for the United States.

Arab and leftist propaganda notwithstanding, Israel is the region’s only democracy, in which Arabs and Christians, as well of course as the Jewish majority (6,556,000 out of a total 8,793,000), are represented in the Knesset. (And Israel’s growth rate, at 2% in 2015, averaging three children per woman, is three times greater than the OECD’s).

The Jewish state has peace treaties with two former Muslim enemies, Egypt and Jordan, increasingly good relations with Saudi Arabia and the Gulf states, and with great powers like China, Russia and India. Its largest economic partner is the European Union, its closest ally the world’s only superpower, the USA, especially under Donald Trump—and U.S. popular support for Israel is, at 75%, the highest ever.

Indeed, we rightly marvel at the breathtaking rapidity, in what seems a blink of an historical eye. of modern Israel’s transformation from a tiny, poor state created just three years after the horror of the Holocaust, into a modern, dynamic regional hegemon. Initially hanging by a thread as the Arabs attempted to strangle it in its cradle, then successfully accepting and integrating hundreds of thousands of Ashkenazi survivors from Europe and Sephardic expellees from Arab countries, Israel became a flourishing democracy, an advanced military power, and a dynamic economic-technological powerhouse—the world’s leading advanced “start-up nation”.

Yet we should never forget that key to modern Israel’s development is the fact it is the legatee of a creative and dynamic Jewish People, whose history reaches back over 4,000 years. As the state of the Jewish People, modern Zionist Israel, secular as well as religious, is the product, of values embodied in Tanach, the Hebrew Bible. Judaism paved the way for modern Western civilization, through its invention of monotheism, and it vision of the rights of the individual and of history as a meaningful process. Indeed, it was Judaism which invented, and with its step-daughter, Christianity, spread, the key modern Western idea of Progress, of man’s ability to
live morally, to speak truth to Power and, through his mastery of nature, to create, minimize suffering, and create a harmonious human community.

Still, Israel lives in a notoriously unstable and dangerous neighborhood, and in a larger post-World War II world which, despite modernity’s many achievements, is also a dangerous, and often unstable, place. And while regionally Israel is in better shape today than at any point since 1947-48, the collapse of many Islamic states into crisis and civil war after the so-called Arab Spring created surrounding instability, above all in civil-war wracked, and Russian- and Iranian-occupied, Syria.

Syria today is a failed state, with half a million dead, civilian and military, and ca.11 million internal and external refugees (half its total population). It is also a potential flashpoint—pro- and anti-Assad forces jostle up against assorted Islamists, Russians, Hezbollah, Iranian forces, Turks and, in the north-east, Kurds and Americans. An unforeseen incident (e.g., Israel’s efforts to prevent the arming of Lebanese Hezbollah by Iran through Syria, the Turks new incursion against Kurdish forces in north-east [Afrin) could, despite “deconfliction” agreements, trigger a wider war.

And behind the Syrian situation is Israel’s one major, continuing existential problem, the terrorist-expansionist Shiite mullah-cracy of Iran, a Holocaust-denying Islamic fundamentalist entity sworn to destroy the Jewish state and well on its way (despite-or because of—the Obama nuclear pact) to becoming a missile-armed nuclear power.

Preventing the devolution of the Syrian situation, blocking Iranian expansionism (in Syria, Iraq, and Yemen) and creation of a nuclear weapon, are Israel’s major political necessities (the instability in Hamas-occupied Gaza is also concerning.) Iran cannot be allowed to establish permanent bases along Israel’s northern border with Syria, and any move to create atomic weapons must be blocked. Whether this can be achieved without direct Israeli (or U.S.-Israeli) military intervention, remains moot.

On a world scale, development of a “new”, Israel-centered antisemitism seeking to delegitimate the Jewish state is concerning, as is the “anti-Zionist” turn on U.S. campuses (BDS, Israeli Apartheid Week, etc.) and Islamic terrorism (still sporadic in North America, as opposed to W. Europe). Yet while these phenomena demand attention and effective
action, they do not—save for an Iranian nuclear weapon— threaten Israel’s, or the Jewish People’s, existence.

You may have noticed the omission here of what even a few years ago, was thought to be Israel’s “key problem”: the Palestinian issue (the “peace process”, the “two-state solution”, etc.). This reflects, across a broad Israeli
political spectrum, a changed reality: continuing Palestinian rejectionism, division (Abbas-Fatah-West Bank vs. Hamas-Gaza), and economic crisis, and a flourishing post l967 Israeli population in Judea and Samaria, has relegated the Palestinian issue to the political back burner.

Indeed, Donald Trump’s recent, historic recognition, after twenty years of Presidential avoidance, of Jerusalem as Israel’s historic capital, is a key policy shift reflecting—despite ongoing Palestinian, UN, and EU  opposition—the simple fact of modern Jewish Israel’s normalization, and permanence, in the region and in the world.

Of course, the Book of the Future is always difficult to read, and capable of unforeseen surprises. Nevertheless, we are right today to celebrate the miracle of our reborn State’s joyous seventieth birthday. Its history shows us that while those who oppose, and often oppress, us, come and go, am Yisrael chai, the eternal Jewish people, lives!

(Dr. Frederick Krantz, Director of CIJR and Editor of its ISRAFAX journal, is Professor of History in Liberal Arts College, Concordia University, Montreal)