For a PDF of Israfax 294 click the following link 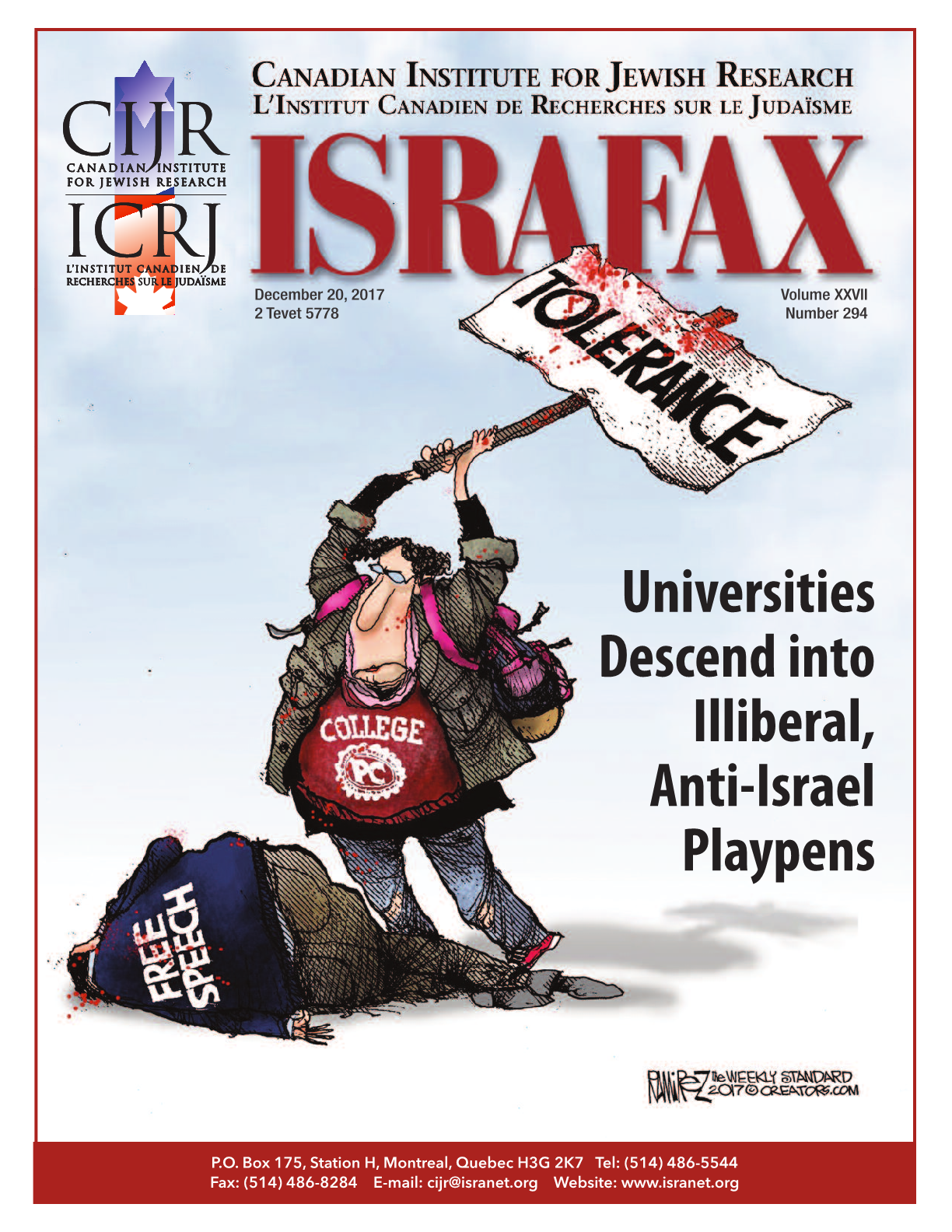 SERIOUS EVENTS IN THE M.E. MAY INDICATE

This Hanukkah issue of ISRAFAX confronts the sad descent of our university campuses into the vicious inanities of antisemitic and anti-Israel BDS campaigns.
Sustained by “speech codes” and so-called “diversity” quotas, pro-Palestinian propaganda, in fact, violates core academic values like free speech, free thought, and individual rights. Insofar as such well-funded campaigns have a practical purpose, it is to delegitimate the Jewish state and so prepare it for destruction. (So far, thankfully, this purpose has been without any practical consequence.)
Yet at this very moment serious events involving real issues and power politics are underway in the Middle East, which may throw the heinous, yet ultimately inconsequential, campus shenanigans into high relief. The outcome of moves currently underway may well result in a marked strengthening of Israel’s regional strength and position.
As we go to press, President Trump is about to make good on campaign promises and recognize Jerusalem as Israel’s capital (whether the Embassy will actually be moved there at this point remains moot). The fact of an impending move is confirmed by the squeals of protest and ominous threats already issuing from P.A. head Abbas, Hamas, Hezbollah and the Arab League. This move, in turn, reportedly reflects an improved Saudi Arabian Israel-Palestinian peace plan, issuing from the ascendancy of the reformist Saudi Crown Prince Mohammed bin Salman (“MBS”), First Deputy Prime Minister, president of the Council for Economic and Development Affairs., and the youngest minister of defense in the world.
This plan, while reinforcing Israel’s current, defensible, borders and reportedly recognizing Jerusalem as its capital, would create a Palestinian statelet by combining some West Bank areas, Gaza and, innovatively, territory in northern Sinai Under MBS, Saudi Arabia has embarked on an aggressive, anti-Iranian foreign policy. Movement on Jerusalem and the Saudi-backed peace process should, therefore, be seen in conjunction with several other recent developments. Saudi-supported Lebanese President Saad Hariri, responding to Saudi pressure, first “resigned”, and
then agreed to be recalled to office, calling in the process for an end to Iranian-backed Hezbollah’s domination of Lebanon and its interventionist role in Syria. Simultaneously, Israel—after warning Teheran not to build permanent bases—has attacked several suspected new Iranian military sites in that country with missiles.
Meanwhile, the situation of the Iranian-backed Houthi rebels in Yemen has deteriorated, after they assassinated their erstwhile ally, former President Ali Abdullah Saleh. Saleh, who aligned with Iran-backed Houthi rebels against Yemeni President Abd–Rabbo Mansour Hadi, had recently called for opening “a new page” with the Saudi-backed Hadi. This earned him the title of “traitor” and led to his recent murder by the Houthis. (Saudi-backed Hadi has now called for unity in the battle against the Houthis and their Iranian backers.)
The common denominator connecting these recent events seems to be U.S.-led and Saudi- and Israeli- (and, indirectly, Egyptian- and Jordanian-) pushback against hitherto unopposed Iranian expansion in the Middle East. Having defeated the IS terrorist caliphate in Iraq (Mosul) and Syria (Raqqah), the U.S.-backed coalition may finally be turning to deal with Iran.
This Israel-supported Sunni political-military force has obvious implications not only for Iran’s Shiite-related imperialism but also for the Iranian nuclear project. Obama’s Joint Comprehensive Plan of Action
not only licensed ultimate Iranian nuclear and missile development, it also agreed to, and indirectly funded, Iran’s regional political expansion. Now, this is under attack, and behind it too lies the deepening North Korean crisis. Here direct action against either Teheran or Pyongyang (who have helped one another in both nuclear and missile development) can have practical, sobering, and reciprocal consequences for both rogue states.
A resumed and more realistic Saudi/Egyptian-backed peace process, conjoined with consistent pushback against, and blockage of, Iran’s expansionism, will also negatively affect three of the other major players in the region—Russia and Turkey, and Iraq.
Russia and Turkey have backed Assad and excluded the U.S. from their Syrian “peace talks” in Astana, and both have played ball with Iranian expansionism. And a weak Shiite-dominated Iraq has fallen under Iranian domination. Russia acts like, but in fact is no longer, a Great Power, while Turkey—increasingly Islamist and authoritarian (and economically unstable)—has alienated its former ally, the U.S.
A defeat of Iranian expansionism in Syria and Yemen, conjoined with a successful Israeli-Palestinian peace initiative and a clipping of Hezbollah’s Lebanese wings, would isolate and weaken both Russia and Turkey, and increase American influence in Iraq.
Although the Middle East is ever unstable and often disappoints projections, it is possible that we are looking at the beginning of a profound re-ordering of the region. If so, events there will throw into high relief the utopian dimensions of the BDSers’ dream of playing a role in Israel’s destruction. What may work here in ivory towers isolated by student ignorance, faculty hypocrisy, and administrative cowardice has little to do, ultimately, with the power relationships and civilizational values marking the “real” world.
North American society, unlike some of our campus play-pens, is deeply pro-Israel, and temporary Russian and Hezbollah-Iranian gains in the Middle East may well be erased as the U.S. recovers the world and regional leadership role it formerly played during and after World War II and the Cold War.
Insofar as Israel’s, and the Jewish people’s, enemies are concerned, on campuses as well as in the Middle East, it is well for them to understand that propaganda lies, “safe spaces”, and “magical thinking” are not political facts. And that Jews today, since 1945 and the re-founding of the state of Israel in 1948 are, like their Maccabean forebears who defended Jewish freedom against the Greeks, not powerless.
(Professor Frederick Krantz [Liberal Arts College,
Concordia University] is Director of CIJR and Editor of its
ISRAFAX and Daily Isranet Briefing journals)
Printer Friendly
Support CIJR
Publications
Events
Archives
CIJR Media